English Grammar Rules | English with Lucy: Hello everyone and welcome back to English with Lucy. Today I am going to teach you about five strict English grammar rules that natives don’t always follow. Yes, that’s right. Your teacher may have been lying to you. 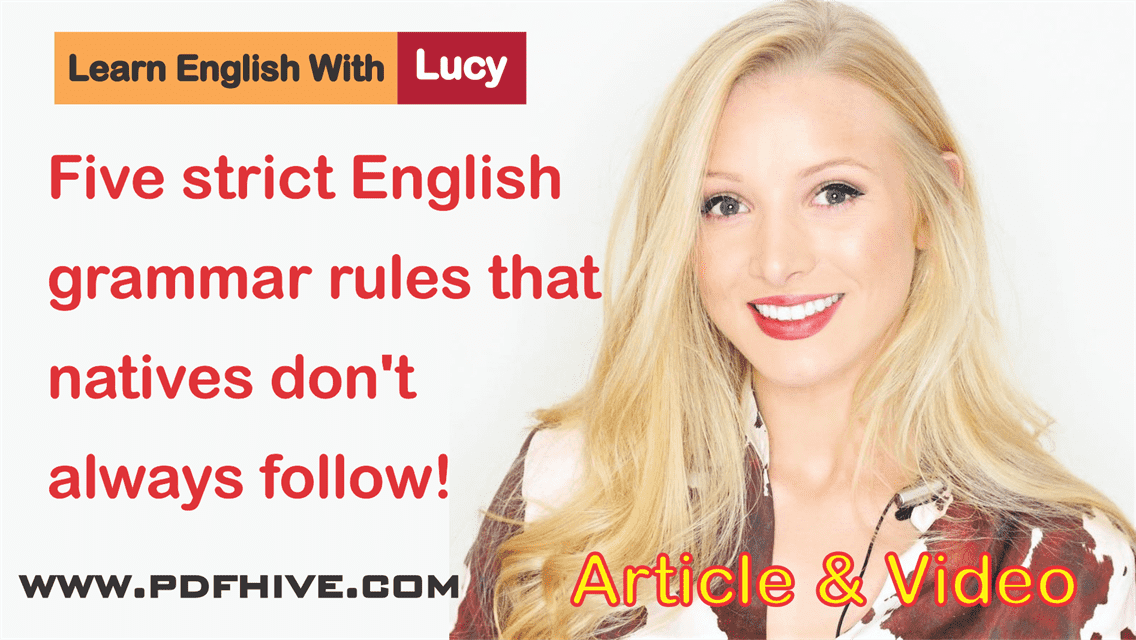 Right, let’s get started with the lesson. All right, let’s start with the first rule of English. There are no rules. That’s just a joke. There are many rules, but we don’t follow all of them and that is what this article is about. I just thought that was a lovely example of how confusing language is.

Let’s started with five strict English grammar rules that natives don’t always follow. And I’m going to teach you these for your further concepts about casual English Grammar rules.

Here is the best video that is explaining these five Strict English Grammar rules from English with Lucy YouTube channel!

1. You should never end a sentence with a preposition | English with Lucy 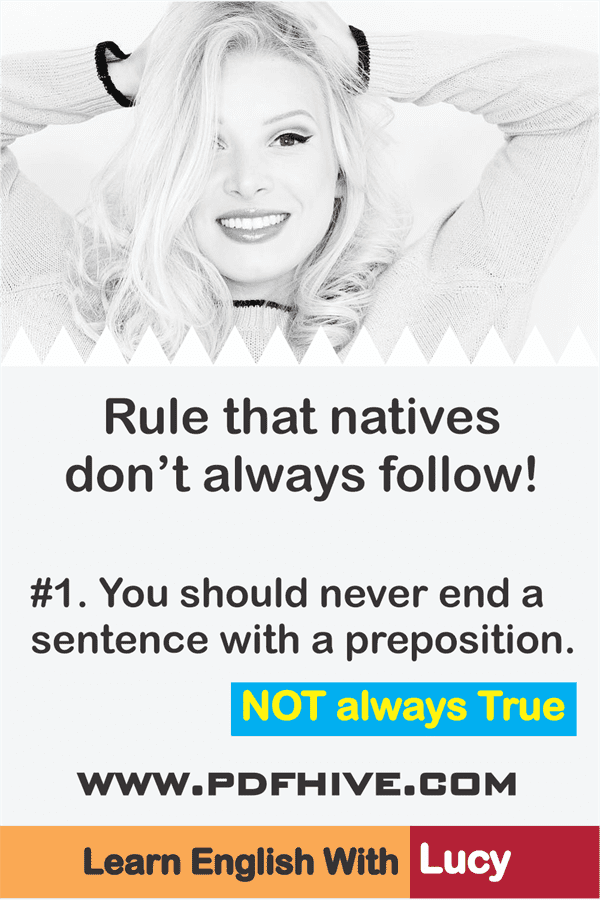 But what about situations in which the meaning has changed? Oh, let’s talk about phrasal verbs. These other verbs made of a verb and at least one preposition. Keep up, run down, get up, and put on, often sentences that use phrasal verbs, end with a preposition.

For example, I think you should get up. Or I hope you can come over. Both of these sentences end with a preposition and it can’t be avoided. If we remove the preposition, the meaning will change and we can’t really rearrange it to avoid the preposition being put at the end. 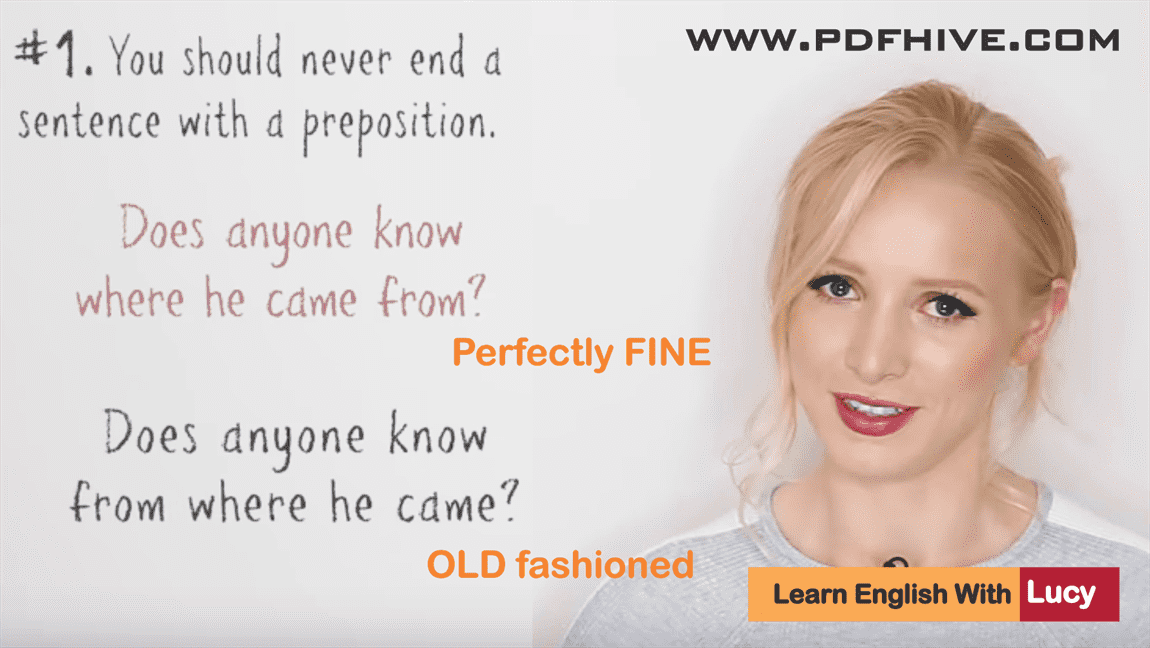 Let’s take a look at four sentences all regarding the zoo. 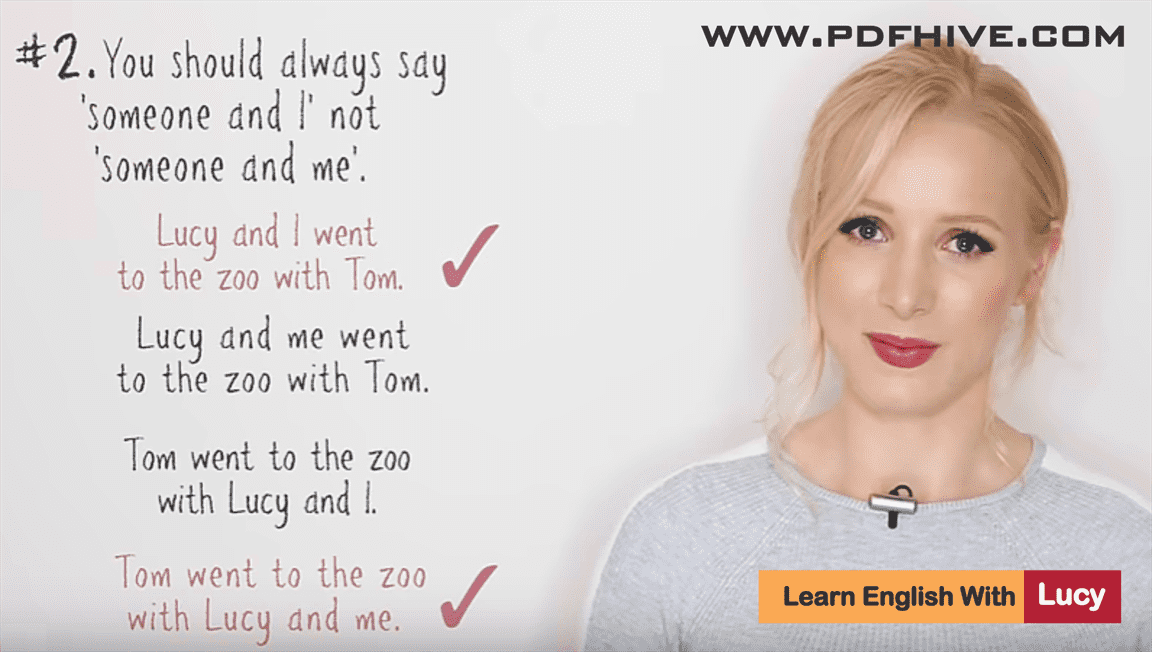 Two of these sentences are incorrect and two of them are correct. The question of whether to use I or me, it comes down to whether you’re using the word as a subject or an object in the sentence. Both words are pronouns, but I as a subject pronoun and me is an object pronoun.

Tom went to the zoo with Lucy and me. In this case me is the object of the sentence. So many native speakers will always be taught to say someone and I, when actually in many cases, someone and me is the correct version.

Number three, a big English Grammar rule that came up recently after I used one of these in a title of my videos, it is that you should never split an infinitive. Many teachers will tell you this because they are simplifying things a little bit, but in reality we do split infinitives. So infinitives are the two word forms of verbs like to run, to laugh, to play. 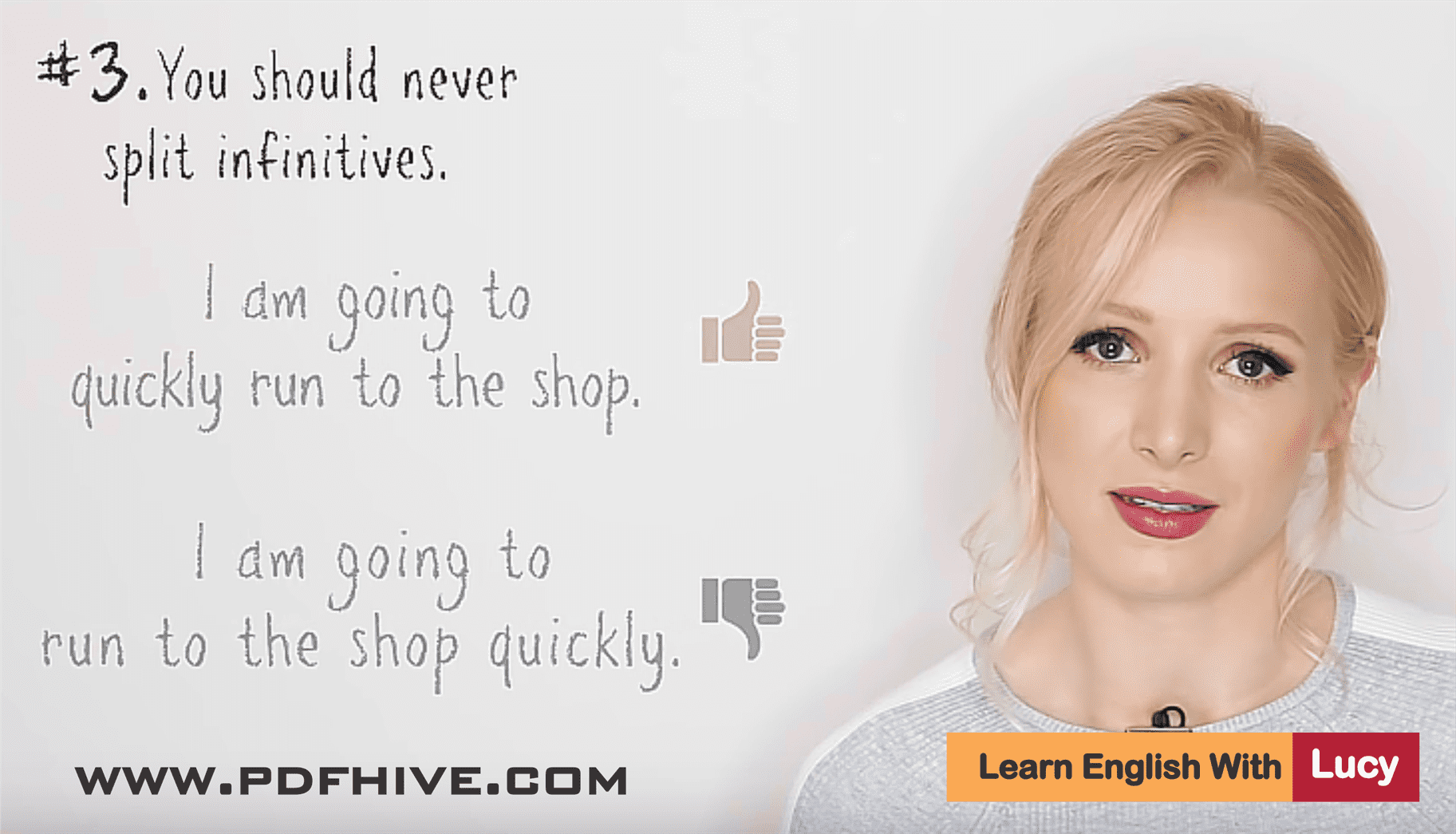 When you split an infinitive, you put something normally an adverb between those two words, for example, to quickly run, to carefully read, to playfully dance. So often it’s a case of it just sounding better when we split an infinitive, it sounds more natural. For example, I’m going to quickly run to the shop. This sounds better than I’m going to run to the shop quickly.

But in some more complex cases, moving the adverb can actually change the meaning of the sentence. Take a look at this sentence. I’m going to really kiss him when I see him. If I say I’m going to really kiss someone, it means that it’s going to be quite a kiss, a big kiss, a very strong one. If I say, I am really going to kiss him when I see him, rather than talking about the strength of the kiss, I’m almost conveying a sense of determination. It’s only a slight difference, but it does change the meaning.

4. Always use "there are" instead of "there is" before a plural | English with Lucy

Write in the comment section, if I use there is before what they consider to be a plural, I’m going to explain that use. But I would admit many native speakers, myself included, do make mistakes and get confused with “there is” and “there are”, because we speak so quickly that we don’t give ourselves time to plan whether there is needed or there are is needed. 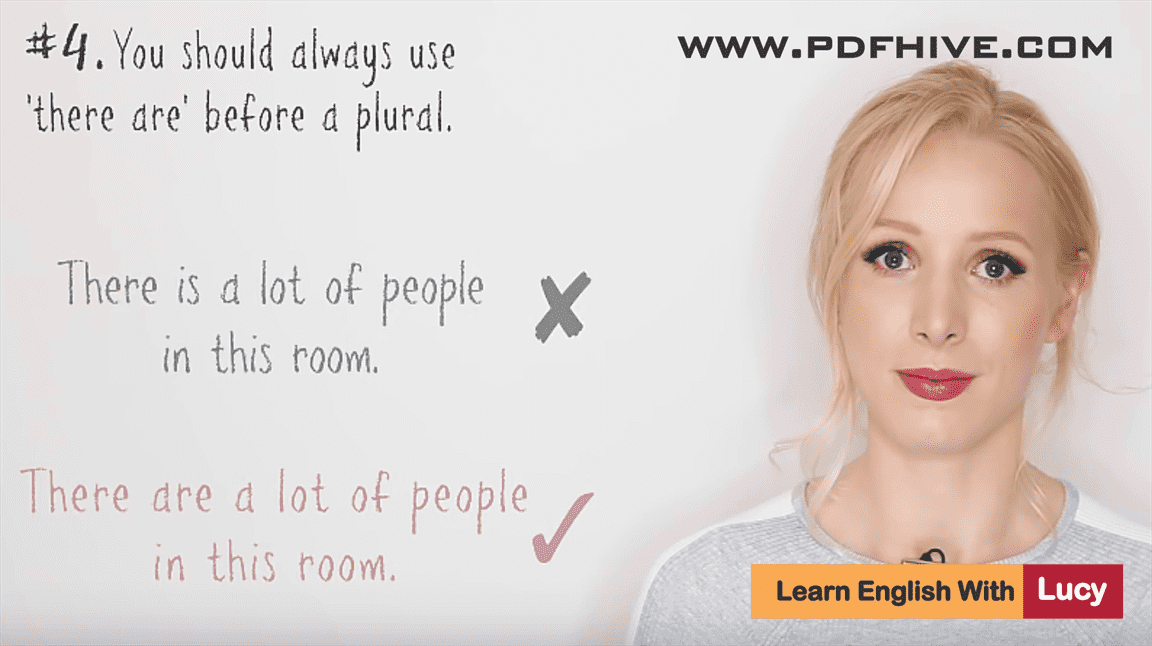 So just to cover the basics we use there is, and there are, when we first refer to the presence or existence of someone or something. There is and also there’s are both singular forms. There’s is the reduction of there is. There is, there’s. There’s is most commonly used in informal speaking.

So instead of saying it is a fly on my head, we would say there’s or there is a fly on my head. There are, is the plural form of there is and there’s. An example, there are two spots on my face. Now in speaking and in some informal writing, we sometimes use there’s when it refers to more than one thing.

Bear in mind that this use can be considered incorrect in examinations. It’s not uncommon to hear native speakers make this mistake. I might say there’s many cakes instead of, there are many cakes because I’m just so used to saying there’s all the time. There’s one apple, there’s two apples. It feels almost natural to me.

Well it’s actually really difficult to work out. In a construction like this the verb is being pulled to there, number, and cakes all at once. You can work out whether you should use there is or there are in this situation by focusing on emphasis.

So that is a clear example of there is used before a singular but a singular formed as part of a list.

Some grammar lovers will still insist that this is incorrect but I’m not with them on this one. It just sounds wrong. If you are ever in doubt, you can actually rewrite the sentence to avoid using there is and there are.

5. If I were rather than if I was | English with Lucy 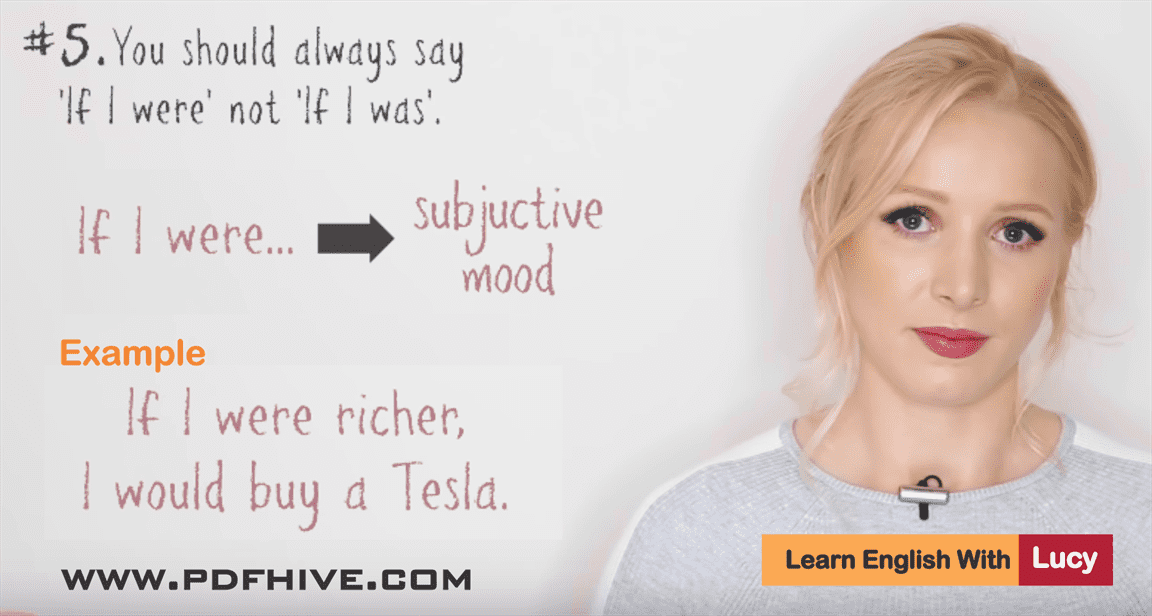 Now we use the phrase, if I was, if we are referring to something that did actually happen, so we have, if I were hypothetical, if I was actually happened reality, so we often use it for reminiscing. An example, if I was late for registration when I was at school, it was because my bus didn’t arrive. This isn’t the most commonly used phrase on earth, but it’s important to know that sometimes if I was is correct. Right, that’s it for today’s lesson. 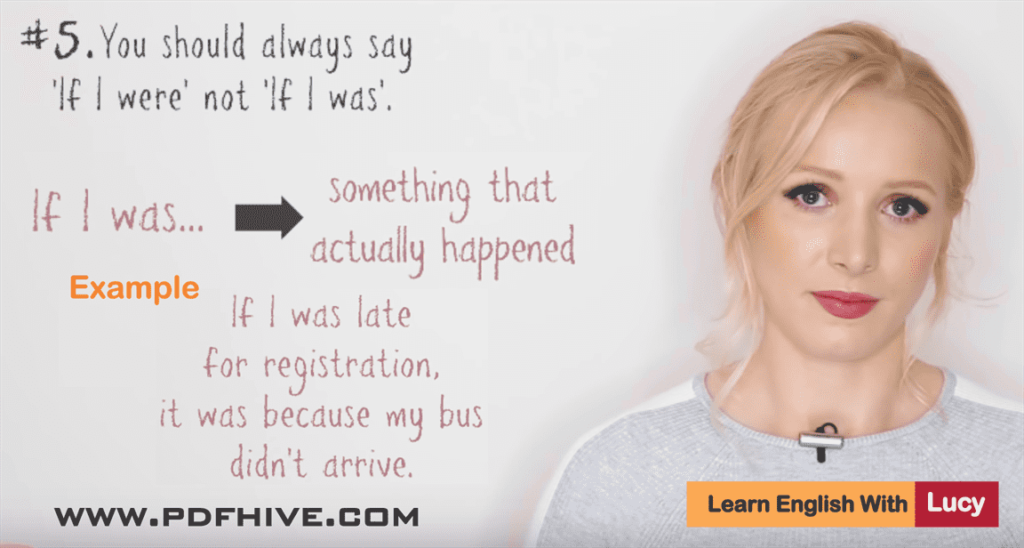 I hope you enjoyed it. I hope you learned something. I really enjoyed doing the research for this English Grammar rules article. It was a quite surprising to see how much misinformation was spread around my primary, middle and upper schools.

Don’t forget to connect with me on all of my social media. I’ve got my Facebook, my Instagram, my Twitter, and my personal channel, Lucy Bella Earl. I will see you soon for another lesson.